Hello, my name is Jonathan Barlow. I’m an estate planning and Las Vegas probate attorney here at Clear Counsel Law Group. Thank you for tuning for yet another riveting video about probate and estate planning tips and practices that you can use to help you in your life and probably actually your elderly parents who actually most need this advice.

That’s what people most think about. If I have a life insurance policy, I get to name somebody. When I die the money goes to little Jimmy or little Sally or whoever you want it to go to.

You can do these same type of beneficiary designations on a host of other type of assets, and not just life insurance. For example, you could put they’re called “POD” or “TOD”, for short, you can put POD designations on your personal bank accounts.

You could put a POD designation on a vehicle title. You can put them on stock certificates. In fact in Nevada and some other states, not all states, but Nevada in particular, allows you to do a form of a deed called a “beneficiary deed” or “transfer on death deed” for your house.

What the effect of these are POD or TOD designations is, is that when you die the ownership of that asset transfers automatically simply by virtue of your death to the person you designated. Let’s think about the house.

Potential Problems with 'Pay on Death' Provisions with Real Property

If you’ve done a beneficiary deed for your house, and you say, “When I die,” basically in this deed, “When I die this house shall be transferred to Brian, Jim and John, my three sons, as joint owners. They essentially, after you pass away, they go down to the County Recorder, take your death certificate with a form of an affidavit and say, “Hey, dad’s died and now we own the house.”

That’s essentially in layman’s terms how that would work. That transfers the title automatically to them. They’re then the current owners. It’s quick, it’s easy and it gets those assets transferred really quickly.

Now, we want to contrast that to what happens if you don’t use these type of designations. Typically these type of assets would go through probate, which is something that we do here at Clear Counsel Law Group quite a bit. 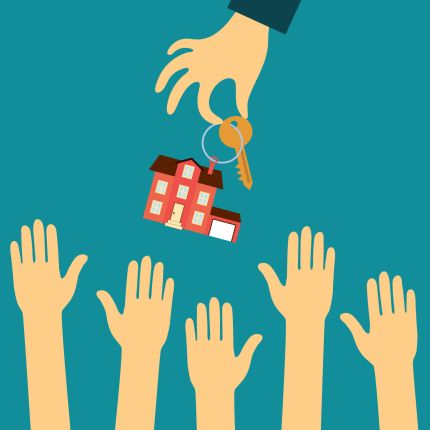 Probate’s a core process that oversees the transfer of those assets to whomever they’re supposed to go to. Whether they go to your closest next of kin or whether you’ve done a will that says you want them to go somewhere. Probate can be expensive in the attorneys’ fees that are paid.

In Nevada, typically, and of course it depends a lot of factors, but attorneys’ fees are going to be somewhere between five to ten to fifteen thousand dollar or more to get that estate through probate. A lot of people are concerned about that cost and that’s why they look for these other vehicles to … or ways to transfer assets without incurring that cost after they pass away.

Again, it’s a quick and easy way to do it. However, I want also point out some important pitfalls and reasons why you might not want to do that. That’s really the main reason why we’re talking about these today.

Let’s think about this. Let’s think about, again, that house. You’ve got Brian, Jim and John, your three sons, and you want to make it easy for them to get your assets after you pas
s away. After you pass away, and if you make Brian, Jim and John the co-owners of the house, that is in almost every situation I’ve ever seen becomes a disaster scenario for those three sons.

Suppose Brian no longer wants to pay for his share of the house mortgage, or Jim says, “I’m not going to pay for the property taxes. I don’t got that kind of money to do that.” John says, “Well, I want to rent the house out and I want to get some rental income.” The other two are like, “Well, I don’t want to be landlords for some period of time.”

It’s a very, very difficult situation to put people in to be able to be on same page with that.

Potential Issues with 'Pay on Death' Provisions with Bank Accounts

Now, with financial accounts it’s not as big of a concern. If you have, again, let’s say your savings account has got fifty thousand dollars in it, and you go into the bank and you designate Brian, Jim and John as the pay on death beneficiaries of the savings account it is really easy for them because the bank is just going to cut three checks in equal amounts to the three of them.

We’re not going to have problems with co-ownership. Let’s think about a couple of things that could go wrong with that situation.

Let’s say John is actually sixteen years old when you pass away. He’s a minor child. The bank is not going to give him that money.

If you have a minor child, and even if it’s life insurance, if it’s a bank account, if it’s any asset those assets will not be transferred to that child unless somebody sets up a court appointed guardianship for that person.

You’re throwing them into a guardianship proceedings in order for that person to get access to the account or benefit from the account. Even if that happens, when John turns eighteen in a couple years he’s going to get all that money straight out, straight into his hands at eighteen years old.

There’s not very many eighteen year olds that can handle a substantial amount of money very well. That’s something you’d probably want to avoid.

Other problems that could come up; let’s Jim, he’s an adult, however Jim’s receiving government benefits. I had this situation just last week actually with somebody whose father has passed away.

That would happen if a person is designated as the pay on death beneficiary of a bank account. They receive twenty thousand dollars, the Government’s going to want to know about that, and he’s probably going to lose a benefit that is conditioned upon his level of income and assets and things like that.

These are considerations you really have to think about. Sorry, one more consideration. Let’s say you designated Brian, Jim and John five years ago, and two years ago Brian died. Brian has children. You love those grandchildren very much, and you’d otherwise want to take care of them.

You effectively have disinherited that line of your family. Also, an unintended consequence that happens frequently with these pay on death beneficiary designations.

There are a lot of good things about these pay on death designations. They do make it easy to transfer the assets. They’re very inexpensive because there should be no need for an attorney to be involved at all. There’s going to be no court costs to transfer them.

However, there’s all kinds of pitfalls to using these in certain situations.

They’re not always going to have to try to sell you on the trust or the will or anything like that if you get a good one.

Sit down with a good estate planning attorney, somebody that you trust to give you the best advice to go through your situation with all your kids or whoever you want to benefit.

Are they minors? Will they be able to handle co-ownership after you die? Are they receiving benefits that would be affected by this?

Those are all considerations that you should take into account when deciding whether to use a pay on death beneficiary designation.

I hope this has been helpful for you. If you have any more questions about pay on death designations certainly give us a call here at Clear Counsel Law Group.

We’d be very glad to answer your questions, to give you a free consultation about your estate planning situation, to give you the advice about what tools you should use or not use.

If you end up doing some planning with us then we’ll charge you for that, but the consultation is free.

Give us a call here at Clear Counsel Law Group.